Stories of Song and Dance

To celebrate the opening of a new performing arts centre and gallery spaces in 2011, Burrinja curated a key exhibition of ceremonial objects from the Burrinja/Neil McLeod Gift Collection. Stories of Song and Dance focused particularly on the unique Malangan artefacts from New Ireland and New Britain in Papua New Guinea, works created specifically within the zone where ceremony and performance intersect.

Showcasing unique Malangan artefacts from New Ireland and New Britain in Papua New Guinea, this exhibition gives an insight into Melanesian cultures, ceremonies and performances. These stunning masks and friezes were produced in the post-colonial period by master carvers Hosea Linge, Ben Sisia and Edward Sali.

On display are impressive Kavat fire dance masks of the Baining society and very rare Iniet stone carvings from the secret Tolai society on the Gazelle Peninsula. The powerful Iniet society was outlawed by the German colonial administration 100 years ago and rumors about its existence still circulate. 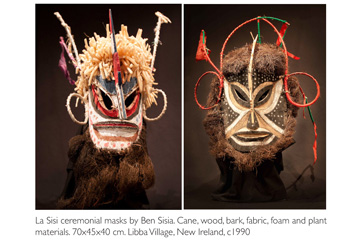 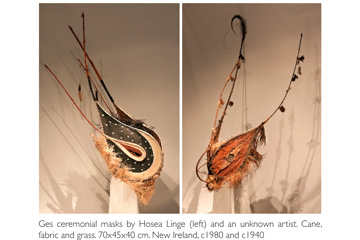 Since earliest times song and dance have been an attribute of human behaviour. Mankind developed language, spoke to communicate and society developed. But, to express feeling and passion, song was used. The passion could be about enjoyment, wellbeing and love, but it could encompass the other extreme of feeling, of anger, rage and hate.

In Oceanic society the same range of feelings is expressed by individuals and groups as in so called ‘western’ or European society. And these feelings are manifested in communal song, often accompanied by dance.

What is dance? It is but a further, more intense, manifestation of human feeling. Song expresses our feelings through voice, using and appealing to one of our senses, but dance involves the whole body, incorporating the sense of sight and movement. When combined with song and musical accompaniment there is no more intense way that humankind can express its feelings.

This is especially the case in Melanesia, those islands to the north and north-east of Australia, where items in this current Burrinja exhibition have originated; the islands of eastern Papua New Guinea.

While we in the ‘west’ often separate song and dance, this is not the case in PNG culture where music, often in the form of some percussion instrument, invariably accompanies dance and is usually associated with song, in unison. While we often leave the singing to ‘professionals’ in PNG village culture it is very inclusive. The whole community will participate and harmonize in song. However, in spite of the general inclusiveness, there are certain boundaries in the village which can dilineate who will sing together, and this is usually along the lines of gender. Women for example, would not sing along with a canoe song, or a war song, while men would be deterred from participating in a gardening song.